We all understand that flossing is one of the most important components of a good oral health routine, however, there are many common flossing mistakes we can all be guilty of making and that could be causing serious damage to our teeth and gums.

Avoiding flossing or flossing incorrectly can actually undermine your health in a myriad of ways, leaving you prone to gum infection and even heart disease in the long run.

Keep reading in order to identify a few common flossing mistakes and how to avoid them.

Common Flossing Mistakes You Didn’t Know You Were Making.

Not paying attention while you’re flossing

Sure, flossing can be a pretty boring task, however, one of the most common flossing mistakes most of us are guilty of is not paying attention while doing it. Truth is, just by looking at the state of your flossing thread you can actually get some good information regarding your oral health.

Next time you’re flossing your teeth take a look at the segment of floss you just used: Does it have any strange colors or smells? Is there blood in it? Paying close attention to your floss can indicate whether there’s an infection growing between your teeth that you haven’t noticed yet, so that you can address it before it gets any worse.

There’s no reason to go cheap with floss, in fact, the length of your flossing thread should be at least 18” per session so that you are able to cover the space between each tooth without reusing the thread. This common mistake can actually cause you to transfer bacteria from one infected gum pocket to another one that isn’t infected yet.

Sure, bacteria can move through the mouth on its own, but making this common flossing mistake can actually help them multiply and thrive more rapidly than they would on their own. 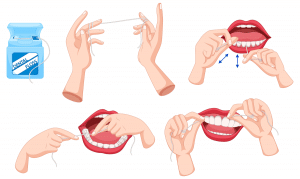 Gum tissue can be very delicate and while flossing is a good way to keep it healthy, you should be careful not to do it so violently that you end up hurting your gums. Allow your floss to be a bit slack when going through the teeth instead of keeping it tight. Snapping into the gum pocket and banging on the tissue aggressively can cause extensive damage over time, leading the tissue to recoil and turn into gum recession.

Remember to wrap the floss gently around the curve of each tooth and slide gently as far as it reaches without irritating the gum. Do this a couple of times before moving on to the next tooth.

The Benefits of Dental Crowns
Scroll to top